Turn Off, Tune In and Drop Out – Love Drinks

Turn Off, Tune In and Drop Out 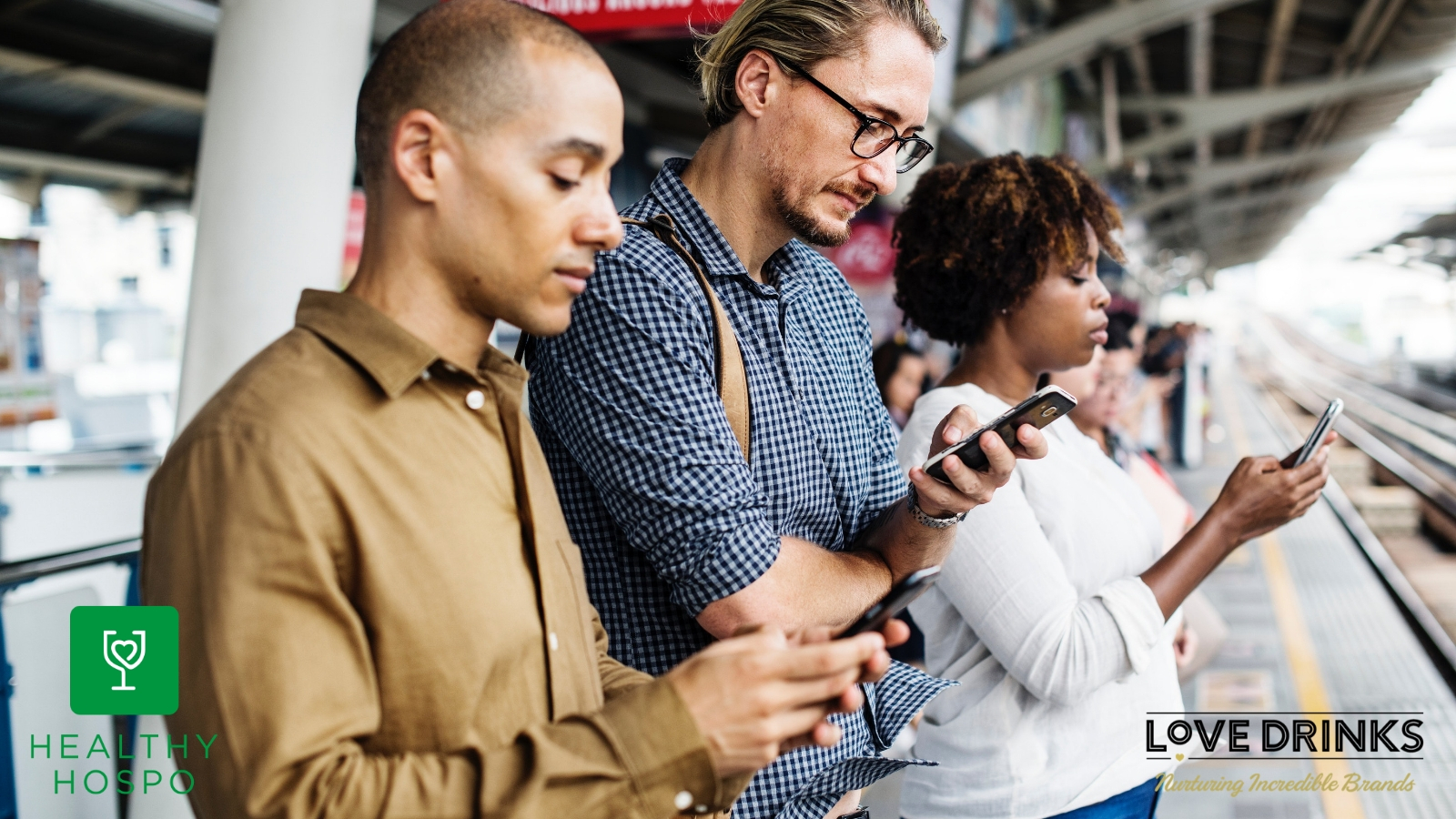 We’re living through an age of unprecedented technological advancement and it’s extremely exciting. The fact that you’re probably reading this on a device that you can fit in your pocket or bag yet has 100’s of times more computing power than the space shuttle is a testament to the rapid pace of change. Computer algorithms, artificial intelligence and robots have replaced humans in tasks as diverse as airline and hotel pricing to manufacturing and even cocktail making!

But we’ve become addicted, both to the physical devices that are almost constantly with us and to the software that bring those devices to life. Who can blame us when the devices we use offer so much and the companies that develop them employ armies of behavioural experts and psychologists to ensure we spend as much time as possible using them.

The average smartphone user, which is most of us, uses their phone a staggering 3 hours and 15 minutes a day with less than 25% of that time spent doing what a tradition phone was designed to do, communicate with people who are too far away to hear you shout. The way we interact with the world has changed forever. More people prefer YouTube to traditional TV with a mindbending 5billion video’s watched daily, we are more likely to communicate via What’s App or Facebook Messenger than actually hear someones voice and Instagram is the social media platform of choice for teenagers in the US.

In 2007 Apple launched the revolutionary iPhone. The chart below shows a breakdown of the average person spending an average day. The red bar highlights the amount of time we spend staring at a digital screen. In 2017 it was approximately 90% of our free time. 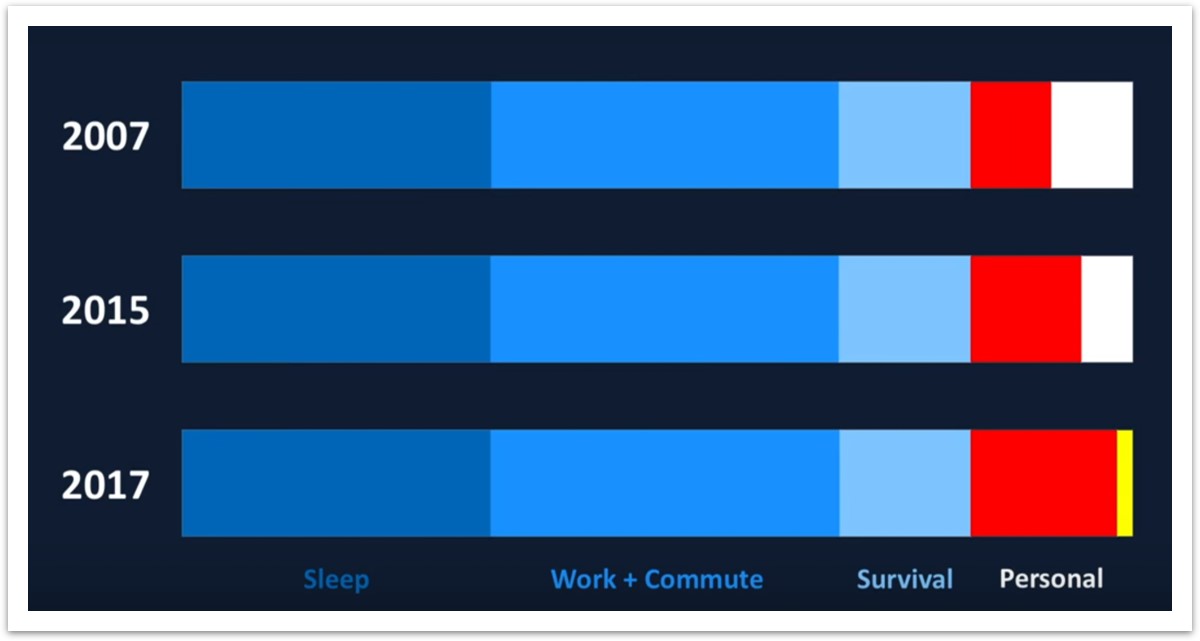 Most of us spend too much time on our phones and laptops, but that doesn’t mean we’re addicted or have a problem. Ask yourself the questions below and it’ll give you an idea of whether you’re suffering from technology addiction

Feel preoccupied with the Internet (meaning thinking about a previous online activity or anticipating the next online session)?

Feel the need to use the Internet with increasing amounts of time in order to achieve satisfaction?

Feel the need to respond immediately to your smartphone?

Constantly check the phone even when it does not ring or vibrate?

Feel anxious when away from your phone or computer?

If you answered yes to any of these questions, and don’t worry you are not alone as the vast majority will have experienced one or more of the above, then chances are that you could do with having a look at how you use technology.

Turn Off Your Notifications

Every time your phone pings or vibrates to let you know that you’ve got a notification, your body releases a little micro-dose of dopamine into your brain. It feels good, doesn’t it? Then another one pops up. And another. You’re on a roll and the dopamine makes you feel positive. But then there’s a gap between the next one. The dopamine wears off and you begin to feel anxious. You check your phone, just in case you missed it. Nothing. A pang of disappointment appears. This is classic addiction and it’s something most of us can admit to experiencing at some point in our relationship with our phone.

Turn off your notifications, all of them. You don’t need to know when someone likes a post on Instagram, no more vibrating pocket when there’s a new video on YouTube and no pings from Facebook to remind you of something that happened 3 years ago. Take control of when you use your phone, don’t let it control you.

No Tech In The Bedroom

Your bedroom is for 2 things and 2 things only. Sleeping and sex. Your phone, laptop, television, tablet, PlayStation/X-Box have no place in there. Not only will you create a space free from technology, but you’ll also get the added benefit of much better sleep and a boost to your love life.

We take our phones everywhere. Whilst you might be able to last a full day without your phone, taking some time each day to put it down and do something less boring instead such as indulging yourself in one of your forgotten hobbies, learning a new hobby, or spending time with friends and family.

Willpower alone isn’t enough to reclaim control of your mobile phone and inbox, but by putting some of these strategies in place and working at building systems to give you the strength you can begin to disconnect from the virtual and reconnect with the real.

Now stop reading this, turn off the computer and go do something less boring instead. 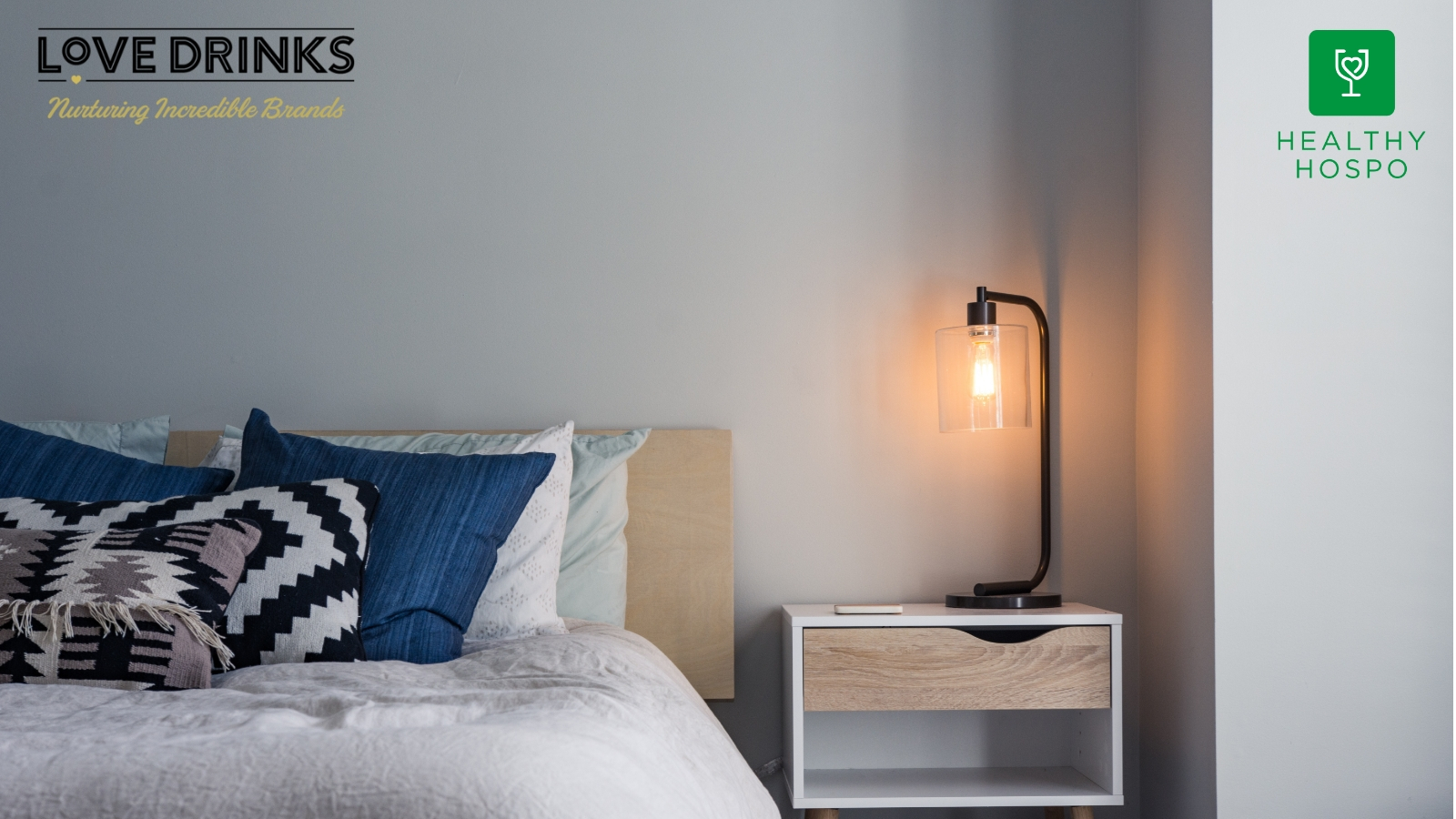 Jan 2nd, 2019
GETTING A BETTER NIGHTS SLEEP Choosing to make quality sleep a priority is cheap and easy and arguably has a bigger bang for your buck health benef... 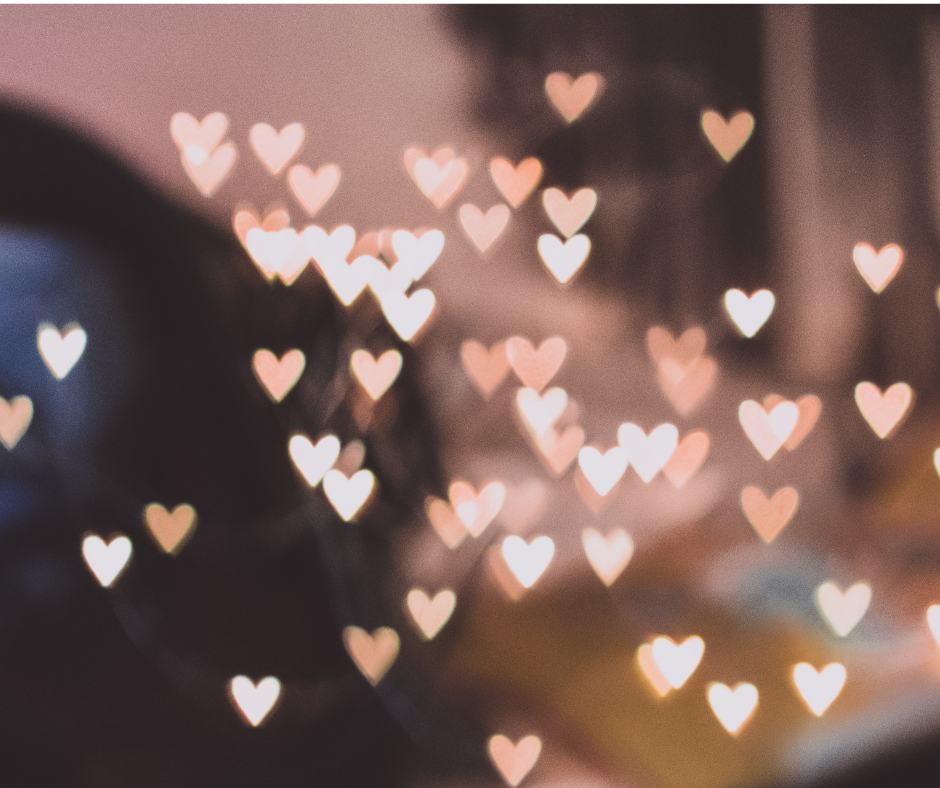 Jan 9th, 2019
Your brain is the most complicated organ in your body. It's a staggering biological masterpiece, able to process more information than the most powerful supercomputer all without you having to think about it. It controls every part of your body, allows you to love, and cry, ride a bicycle and imagin... 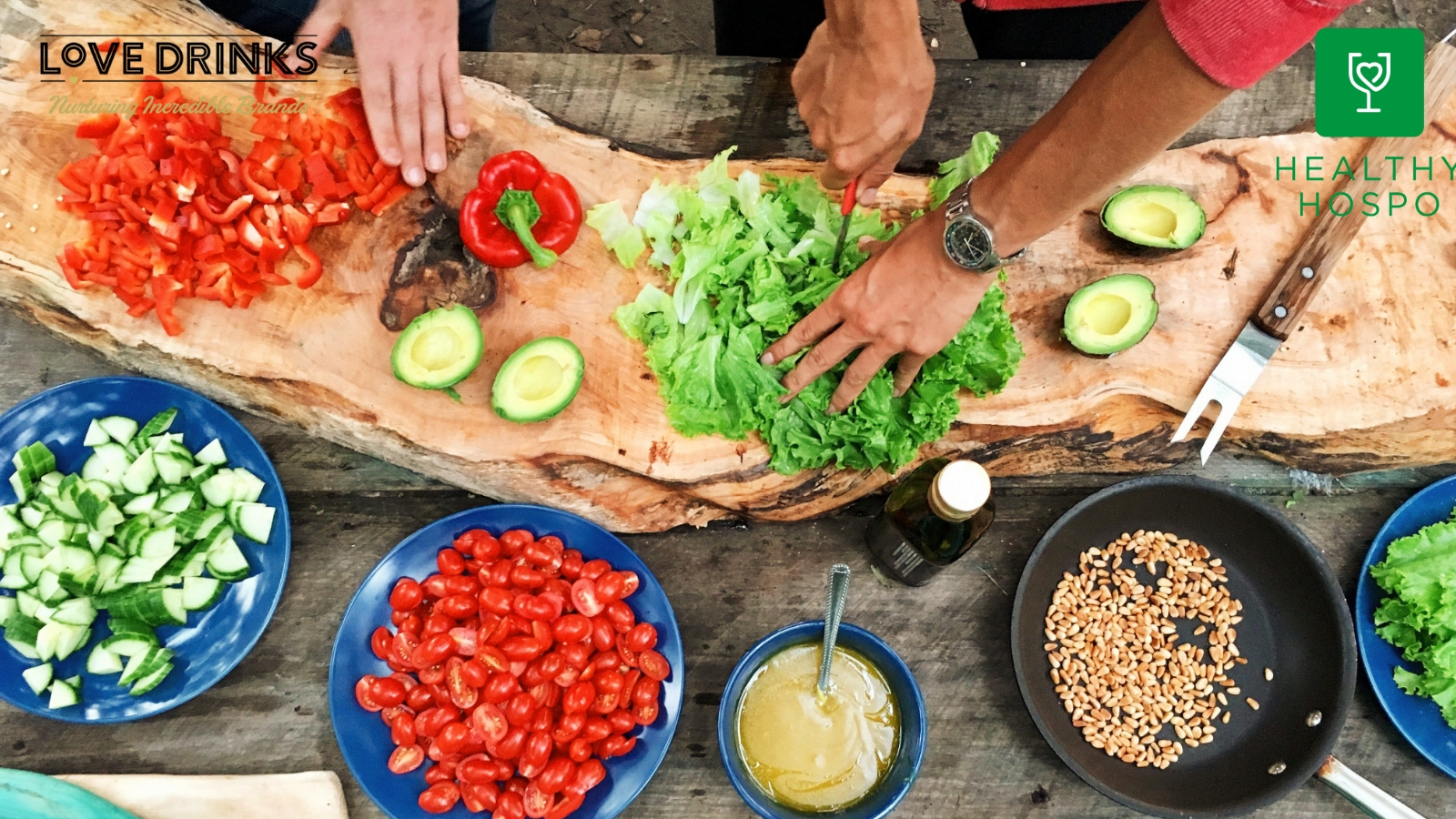 Eat Anything You Want*